After two and half hours of shoveling, AGAIN, I’m back at the same old thing.

I didn’t relax this when I first posted it, but Regret, the mango IPA at Greenbush, is a collaboration with Dimo’s Pizza.

After one day of closure, Tapistry is open again with a refreshed staff and crew. Thank You very much!

Tapistry is closed today for an employee party, so I’m starting, and ending, today’s journey at Greenbush. Tomorrow, I’ll be back on schedule.

Mouth club Monday at Greenbush and they have a new beer, a mango IPA , clocking in at 6.3% and call Regret. No regrets on my part, though, I think it’s delicious! 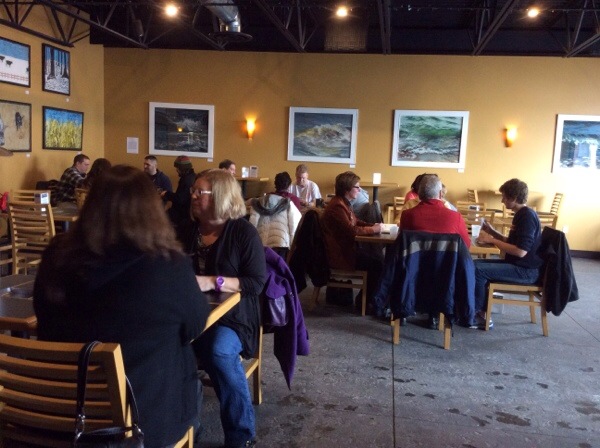 It’s Super Bowl Sunday, aka the Big Game Day! Don’t forget to stock up on some craft beer. I found Founders Centennial IPA on sale at Meijer for $8.49, so I picked up a six pack. What craft beer would you choose?

Btw, Greenbush has a take out special; when you purchase a pizza and a beer to go they’ll include an order of wings for free. Yummy!

And, don’t forget that Tapistry is having a Euchre tournament from 2-5 pm. I’ve never have played the game, but according to those who I have spoke to, it’s a lot of fun.

If you want to warm up, though, on this cold and snowy day, stop by Greenbush and get their hot and spicy chili. It has the kind of heat that just keeps building with each bite. Make sure you have a cold Dunegräs, or other beer, nearby to quench the fire.